Dog owner:  “Father, my dog is dead. Could ya’ say a mass for the poor creature?”

Father Lawrence: “I’m afraid not.   We cannot have services for an animal in the church. But there are some Baptists down the lane, and there’s no tellin’ what they believe. Maybe they’ll do something for your dog.”

Father Lawrence:  “Sweet Mary, Mother of Jesus! Why didn’t ya tell me the dog was Catholic? 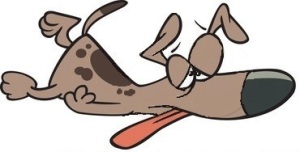 A Buddhist knocked on the vicar’s door with the sad news:

“My carma has just run over your dogma.”

A farmer and his son were on a train headed for their first visit to the city when a priest hobbled into their compartment on crutches, with his foot in plaster.

“Slipped in the bathtub,” he explained.

When the priest got out at the next station the son said, “What’s a bathtub, Dad?” 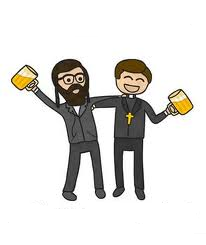 Priest: Rabbi, when are you going to break down and eat ham?

Rabbi: At your wedding, Father.

A priest, an evangelist, and a minister were in a boat in the middle of a pond fishing. None of them had caught anything all morning.

Then the evangelist stands up and says he needs to go to the bathroom so he climbs out of the boat and walks on the water to shore. He comes back ten minutes later the same way.

Then the minister decides he needs to go to the bathroom, too, so he climbs out of the boat and walks on the water to shore. He, too, comes back the same way ten minutes later.

The priest looks at both of them and decides that his faith is just as strong as his fishing buddies and that he can walk on water, too. He stands up and excuses himself. As he steps out, he makes a big splash down into the water.

The evangelist looks at the minister and says,“I suppose we should have told him where the rocks were.”